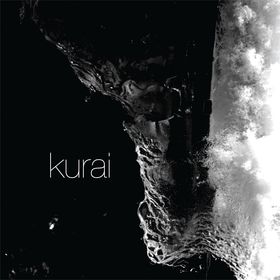 The adjective Dark, to which the word Kurai references in Japanese according to the press release of this album, conjures many emotions and feelings. But in this case Kurai is not supposed to mean so. And so, when coming to interpret such a word, what approach would you use?

In the case of Kurai’s first release, there is much to absorb and quite a variety of moods and sounds. In the opener Herbert Quain they present abstract soundscapes, free form jazzy playfulness, obscure and menacing eerie atmospheres, all very well executed and presented to the listener. This track reminds me most of Yugen’s album, Labirinto D’acqua, which is a splendid release also on the Altr0ck label.
Ambient yet disturbing: such is the general mood here. One feels as if some monster is going to come out of the dark at any moment and attack a vulnerable listener.
At times I feel in some remote dark forest surrounded by ominous trees, which branches seem to reach out to you, threatening to grab you and take you into their realm. At other times it sounds as if I am alone in deep space, having lost contact with any human for years and the sounds heard are those of weird inhuman entities that dwell in this part of space. Such is the experience of tracks like Cavedio.
This can be an exceptional soundtrack to a mystery gothic movie or book. Being mostly acoustic, there is a strange contradicting effect of the music being both calming yet spooky.
The atmosphere created works well throughout the album and at times you wonder how can the instruments create such a weird sound, showing the skill of the musicians. Such is the experience I have with Fluster-Kadenz.
The instrumentation here consists of a harp, piano, clarinets, saxophones, tubax contrabass, shruti box, guitars, mellotrons and percussions, so you can imagine the broad sounds they are able to create. The musicians, most of them playing in Yugen, do a fabulous job of getting the most out of their instruments, squeezing out the potential of each to create the special feeling of this release. I can point out the great percussion in L’ecco Delle Fiamme which in greatly responsible for the appeal of this track for me.
I’d like to focus on one track here: Treffpunkt is a fascinating piece, which showcases the ambience side with the jazzy and whacky aspect of the band’s style. There is some bass saxophone “abusive” playing here followed by cool soothing laid back synth-like sounds, and then hectic and demented playing on the guitar, sax and percussion (there’s probably more I miss). This piece is a good example of the capabilities of this ensemble and of the overall sound on this release.
There are occasional short tracks serving as interludes, some have a piano playing, somewhat easing the heavy mood imposed by the nature of the music dominating this album.
This album will work best with headphones late at night in a dim lit room by yourselves. Don’t look for melody much or for hooks in the music or for an ambient relaxing piece. Instead look for an experience of having sounds escorting you and creating a day dreaming experience for your mind to explore. This album depends on the listener fully “participating” as it relies on the listener to complete what the musicians and composers began. Otherwise it can be boring and pointless.
As you listen you can also appreciate the technique of the musicians in the various tracks, their playing ability and the sounds they’re able to produce with their instruments.
Posted by Assaf Vestin at 13:28