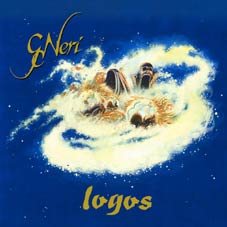 Giorgio C. Neri is a multi instrumentalist who formed and played in the band, Agarthi Sound Factory. He states his influences are “Led Zeppelin for the power and the sense of english folk,YES for the elegance and long suites, Gong, Tangerine Dream, Ash Ra Tempel, for the sense of infinity space in music, Zappa, Bach, and Italian Le Orme and P.F.M. and i love Devil Doll. But everything can influence me on my music.”
Here he presents his first solo album, Logos, released in 2009. He plays every instrument here aside from the drums, which are played by Roberto Maragliano, the flute by Gian Castello (Tuona il cannone) and the singing by Giuseppe Alvaro (vocals on Tuona il cannone).

This album feels like going through a weird journey through someone’s mind. The listening experience reminded me of the oddness of Devil Doll and Electric Orange; odd, peculiar but entertaining and fascinating. It can also be likened to a train ride through ever-changing scenery. One is faced with a varied ensemble of atmospheres; whereas some tunes are pensive, slow and meditative in style, others are more aggressive, rocking and determined. You might think this is too much of a shift between tracks, but really, it isn’t, and it works quite well, as they seem to complement each other and interact well.

I’ll mention a few notes I have on some of the pieces on the album.
The first track, Intro, sets a very eerie and dark mood, reminding me of the intros to old death metal albums, where they would deliberately use this kind of music to set up a specific mood. And like those albums, the mood is counteracted by the following piece, Id & Trad. This track, a psychedelic/classic rock sounding tune, is a repetitive piece that while nice, gets a little boring on the third minute when nothing develops or changes and indeed, some variation would be nice. Similar spirited pieces on the album are Alleanza and Godinus 7 (part 2).

Tracks 4 to 6 are a dynamic chain of 3 tunes (that go on uninterrupted), covering a wide range of emotions and energy levels; from the slow, beautiful and calm Seconda Navigazione and Addio, to the splendid Le Braccia E Le Ali. This last piece is my favourite on this album, as it shows the range of style Giorgio Neri possesses, his ability to create an interesting and developed composition.

Godinus 7 is a two-part tune, starting off with an indo-raga theme on the first part and then moving on to a space-rock, similar to the opening Id & Trad tune, in its psychedelic elements and repetitiveness. The same criticism I had for Id & Trad applies here as well, though to a smaller extent, as it does feel to have more variety; moreover, the ending segment with the bagpipes turns this piece on its head.

Tuona Il Cannone is a beautiful song, reminding of the greats of the Italian prog rock in spirit.

L’ultima Danza is another favourite of mine on this album, its main theme being in the same rock manner as Id & Trad, Alleanza and Godinus 7 (part 2), it introduces a short slowed-down interlude, resuming the main theme shortly after, lead by a compelling solo guitar and making shifts in the theme and pace. This is the type of variation and development I was referring to with regards to Id & Trad.

One flaw that I hear (or perhaps feel, is more appropriate) is that there is some lack of balance in the mix, as some instruments should be more in the foreground, while the drums are pretty dominant and at times overpowering.
Logos is an eclectic and dynamic musical ride, courtesy of Giorgio Neri. It provides engaging rock tunes with repetitive psychedelic elements alongside subtle compositions that explore spacey and peculiar sounding textures.
Worth checking out.

Myspce
Posted by Assaf Vestin at 21:26