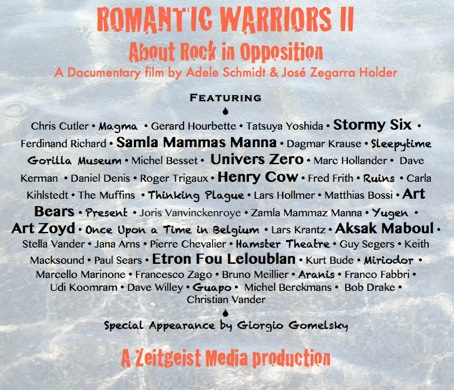 WELCOME!
Hey there — Romantic Warriors – A Progressive Music Saga directors Adele Schmidt and José Zegarra Holder here. Thanks for taking the time to check out our new film, called Romantic Warriors II – About Rock in Opposition. We're so excited about this project and deeply appreciate that you've taken an interest. This time we spent filming in Europe and the U.S. and discovered a fountain full of incredible musical treasures. We couldn't be happier with the friendships we made and the footage we collected, and it will be a huge thrill to share the finished movie with all of you, once it's complete. We're extremely grateful for your help bringing this film to life.

ABOUT THE FILM
Five Bands: ‘Five rock groups the record companies don’t want you to hear’. This was the tag in the poster of the first RIO festival in 1978 in London, symbolizing the anti-commercial stance of these bands and the ‘uncompromising’ character of their music. RIO bands embrace musical styles such as progressive rock, Zeuhl, improvisation, noise, avant rock, jazz, classical, folk and often extreme experimentation.

One Movement: United in their opposition to the music industry and the pressures of compromise over art, this collective of progressive bands started a movement that remains one of the reference points that many listeners, musicians, and distributors use to describe a cooperative approach of making and distributing non-mainstream music.


A Legacy: Even when RIO as a movement was short lived at the time, it spearheaded the creation of its own progressive music subgenre, a category called RIO/Avant Progressive that is being used to label contemporary bands from across the world.


YOUR HELP MAKES A DIFFERENCE!

Our team has been working on this project for over two years, and it's been a labor of love. Until now, we've been able to fund the entire cost of production on our own, and the good news is that the whole movie has already been shot and we have a rough cut. But as we transition into the completion phase, we need your help to get us over the finish line.
You can help in a number of ways. First and foremost — by donating to this IndieGoGo campaign. Your contribution will make the film's completion possible, and as thanks for your generosity, we'll hook you up with some awesome and unique prizes. Your support will go directly toward:
The funding goal we have set is the  amount that will help us finish this project by our deadline. Additional money collected beyond our goal would be immensely helpful and allow us to promote the film and start an outreach campaign for the film.


There are some other important ways you can help. The more people who are aware of our project, the better our chances of raising the necessary funds. By emailing your friends about the film, posting a link to this page on Facebook, or spreading word on Twitter, you'll be giving us crucial, valuable support. Please help us reach as many people as possible!
We hope you will join us to bring the story of these outstanding musicians to the outside world — and help raise awareness for their music. It’s a powerful story and we're grateful for the opportunity to tell it. Thank you so much for joining in and becoming a part of this!


We need your help! Pledge!
Our anticipated completion date is July 2012. Please help us finish our film by pledging via IndieGoGo. All funds raised will go directly toward the film to help pay our asistant editors, translations, transcriptions, subtitling, graphics, licensing fees, sound mixing, color correction and mastering.


Invite your friends to support our project!
We also encourage you to support us by liking our Facebook page or by sharing this project with friends, family, co-workers, or anyone else you know who may be interested in supporting this project.
Thank you for your contributions and support!
CLICK HERE TO FOLLOW US ON FACEBOOK!


AND PLEASE: EMAIL YOUR FRIENDS, POST A LINK ON FACEBOOK, OR TWEET ABOUT US! Anything you can do to help spread the word will be of tremendous service, and is enormously appreciated.
Please send us your email so you can get our news of the progress of the film: adele@zeitgeistmedia.tv
We'd love to hear from you!