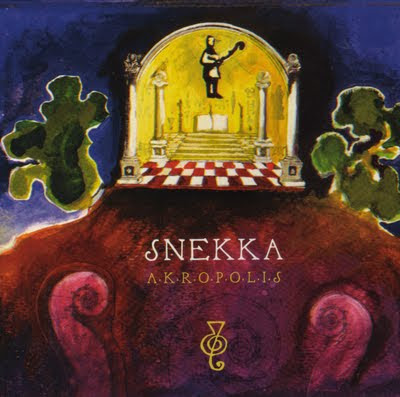 Snekka is a Finnish folk band, formed in 2000. Akropolis is their third release to date. The album was produced with Markus Pajakkala, who is the man behind Utopianisti, whose s/t album I reviewed and was enthused by.
Akropolis, an instrumental album, chronicles an imaginary journey from the outskirts of Finland through its capital, Helsinki, all the way to the Akropolis in Greece. It chronicles an ascension through various stages, to a heavenly place, symbolized here by the Akropolis.
We start with the piece called Kaustinen, named after a town in the mid-west of Finland and start our southbound journey to Helsinki. The two pieces, Kaustinen and Helsinki, are short tunes with a similar sound,; drummer and percussionist Oskari Lehtnonen performing a frantic beat (which sounds like a programmed rhythm) and a Tero Hyvaluoma playing restlessly on his fiddle.
In between, we are graced with a variety of folk tunes, some more upbeat and energetic than others. Kaustinen is linked directly to Shottis från Hästgran, which starts in a mellow fashion and somewhat reminding me of Mike Oldfield; along the piece, the band emerges in full power and liven things up, directly leading up without pause to Polska nro. 1. Here you get the whole group in full force, creating a rich and volumetric sound including beautiful keyboards work (in the background) and the electric guitar towards the end. The other Polska-related piece here is called Triplet Polska; however it sounds more like an Irish folk tune. Nonetheless, it has a catchy melody, with an ear-worm effect. This piece gets better as it goes on, with added layers, in the form of keyboards by Matias Tyni.
I particularly enjoy it when they go a bit over the edge like in Fired. It is a bouncy and bumpy ride, heavier (due to the subtle underlaying electric guitar riff) but still retaining the folk basis. There is a lovely section here that sounds like a deranged folk-fair came into town, featuring Markus Luomala on the accordion. At some points it reminded me of Alamaailman Vasarat.
Snekka doesn’t neglect the tender side, as is evident from the two following tunes, Heimbacka and Cocktail Part II, the latter based on a folk tune called Juottomarssi. Here we have midway, guitarist Olli Seikulla emerges out with a delicate and cool sounding solo, like a breeze hovering over the slightly agitated musical waters.
Their most tender and heart-warming side shines through in the closing title track. Akropolis ends on a dreamy note. It has an ethereal quality, an ambient feel, but not an abstract melody. A bandoneónand a string quartet join in mid-tune giving the piece a heavenly touch and a blissful ending to the album. The ascension is complete.
Akropolis is a beautiful album (and sounds great), but more than that, it has lovely music, the kind that warms the heart to listen to and makes you happy. The band’s folk basis is mixed with rock elements, and dare to explore other musical plains that are not always associated with this kind of music (see the two “city” tunes, Fired and the title piece for instance). I enjoy listening to this album and I’m very interested to hear how they’ll develop from this point onwards, since they sound to me like a band that wants to travel around musically.
Lineup:
- Tero Hyväluoma (violin)
- Markus Luomala (accordion)
- Olli Seikkula (guitars)
- Tarmo Anttila (bass)
- Oskari Lehtonen (drums, percussion)