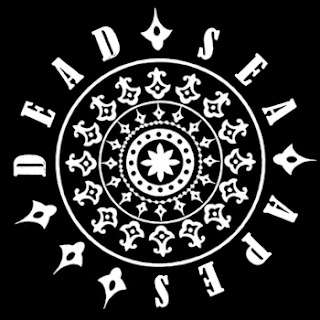 Dead Sea Apes is the trio of Brett Savage (guitar), Nick Harris (bass), Chris Hardman (drums) from Manchester England.
In December 2010 they released their debut release, a single called Soy Dios with what sounds like three versions of this same tune. It features instrumental psychedelic (slightly drone-y) post rock, with some "Western" essence reminiscent a bit of what Grails did on Burning Off Impurities and of Red Sparowes, though more experimental and with psychedelic, ambient and drone elements. The music develops gradually from uncertain and sometimes meandering ground into decisive crunchy riffing with a clear melody line. I do like how the development part is done. I like the subdued fuzzy sounding drumming (which becomes clearer), the effects being used and bass coming forth around 4:30 (at least on the second track/version), though I would have liked for it to lead the way more and then the move to the loud and full rock section, though I'd have liked a broader use of the bass on that segment in the song to give it a deeper and fuller feel. Each version has a longer psychedelic and ambient amorphous section with version three being entirely "ambient" in nature, not reaching any of the "rock" segments of the previous versions. And so with one tune, they show their ability to create vastly different sides of the band's style and sounds. I'd love to hear more songs from them and how they interpret them differently.
Also of note is that they performed a gig in December 2010 where they played an improvised set with Damo Suzuki (vocalist for Can back in the day).
Here's their promo sheet:
"Dead Sea Apes are a three-piece group from Manchester UK, comprised of Brett Savage (guitar), Nick Harris (bass) and Chris Hardman (drums).  Since mid-2009 they have been developing a hard-hitting, dynamic blend of desert rock, drone rock, garage rock, krautrock, post-rock, Western soundtracks and psychedelia.

Their debut single Soy Dios was released in December 2010, a nine-minute instrumental inspired by the Mexican psycho-Western El Topo and backed by two equally epic remixes.  Several more tracks are currently in the works for a new EP, to be released in February or March 2011, including Astral House which was recently played by Stuart Maconie on his Freakier Zone show on BBC 6Music.

As well as working as an instrumental trio, Dead Sea Apes regularly collaborate with other musicians, such as Canadian singer-songwriter Gabe Minnikin, and Stray Light's Ellen Poliakoff; and in December 2010 they played an extended improvised set with legendary CAN vocalist Damo Suzuki.

The group are currently arranging more gigs for 2011. For up-to-date information see their blog at www.deadseaapes.com; they can also be found on Myspace, Facebook and Bandcamp."